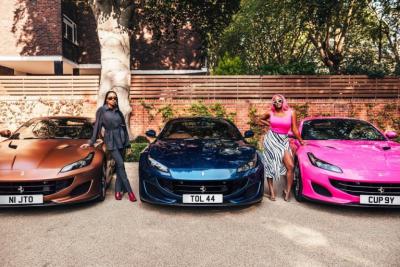 Popular entertainer Florence Ifeoluwa Otedola (DJ Cuppy) showcased the new Ferrari cars that her dad Femi Otedola bought for her and her sisters.

AutoGuide gives a retail price of $215,000 for the 2020 Portofino, the most basic of the Ferrari brands.

In Naira terms the cost will be between N240 and N251 million at the official exchange rate of N387 to a dollar. In the parallel market at N465 to a dollar, it means the billionaire has spent about N300 million on the gifts to his daughters.

Cuppy earlier today flaunted the cars on Twitter in a post that read “Papa took us shopping and bought one of each! #FerrariPortofino  #CuppyDat.”

News of the gifts has ignited a frenzy on Twitter, especially with Cuppy hinting the Ferrari may be the theme for a new song.

Davido, in a retweet wrote: Congrats cuppy …. FireFire I will do the same for my daughters one day AMEN .. chai money good”.

What is in your mind! Is this man about to stock his shop with cartons of looted COVID-19 noodles? (...
Read More...