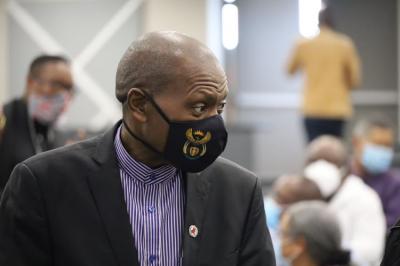 Buyeye said in a statement on Tuesday, “We have learnt that in the past 24 hours in our hospitals, we recorded 17 deaths - 14 of those occurred in the private sector and three in the public sector.

The deaths were recorded even as the national coronavirus command council met on Tuesday to consider proposals for tighter lockdown restrictions in areas seeing a renewed surge in infections and deaths.

Popular holiday towns in the Sarah Baartman district, in the Eastern Cape, are buckling under the strain of Covid-19 as death numbers spike, health.

Infection numbers have been rising in the Eastern and Western Cape. All planned events in the Western Cape's Garden Route region have been banned until further notice due to rising infections.

Buyeye said, “We would like to encourage residents to seek the government quarantine sites if the situation is not conducive in their homes for them to quarantine or self-isolate.

“We do not wish to lose more people in our city to this deadly virus. The numbers of patients in the intensive care units [ICU] are increasing every day.

“We again call on our residents to take this virus seriously. Each of us by now knows of someone who has died due to Covid-19. It is painful to see so many people die when some of these deaths could have been avoided if everyone complied with the regulations.”

He warned earlier that “stricter restrictions are needed in the city” or the virus would spread uncontrollably.