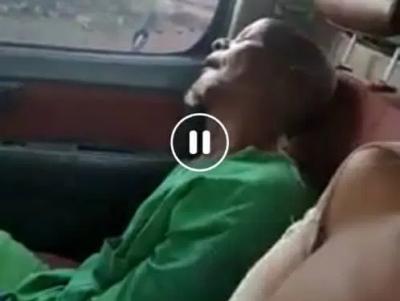 The self-acclaimed Fulani warload, Iskilu Wakili has been arrested by a team of security operatives located in Ibarapa area of Oyo state.

Wakili had challenged Sunday Adeyemo, a youth leader popularly known as Sunday Igboho, to a duel after he (Igboho) issued an evacuation notice to herders in Igangan and Ibarapa area, blaming them for insecurity in Oyo state.

Following the evacuation notice, a mob had attacked some houses in the area, after which Seriki Saliu, the Fulani leader in Ibarapa, left the community.

Confirming the arrest to CEOAFRICA source via a text message on Sunday, Gbenga Fadeyi, the police public relations officer in Oyo, said Wakili and three others are in police custody.

“Yes, (he was arrested) with three others,” Fadeyi said.

Oguntola Adeola, a security operative, told TheCable that Wakili’s arrest was carried out after a gun battle.

“Wakili has been parading himself as a Fulani warlord in Ibarapa area. He was arrested after a gun fight with the Oodua Peoples Congress and other security groups early on Sunday. He was arrested with three of his fighters,” Adeola said.

Ad“He said he was sick and has been taking treatment in Cotonou, Republic of Benin. He also said he only returned to Ibarapa from Cotonou on Saturday, but it was a lie. After arrest, he stopped talking to us.”

Asked if Igboho was involved in the operation, Adeola said he could not confirm the youth leader’s involvement.

“I cannot tell you what Igboho did, but we all know what he had done before now to set the tone for the herdsmen evacuation. The events are interwoven,” he added.

In a statement issued through Kehinde Aderemi, his special assistant on media, Gani Adams, the Aare Ona Kakanfo of Yorubaland, confirmed the arrest and commended the security operatives for their efforts.

“I am happy that the notorious kidnapper had been captured alongside three others. It is a good development and a positive signal to other criminal elements that the South-West is no longer an abode for bandits, kidnappers, and criminal herders,” Adams said.

“I commend all the members of the joint security team that has made this possible, because with the video at my disposal, it was purely a neat job.”