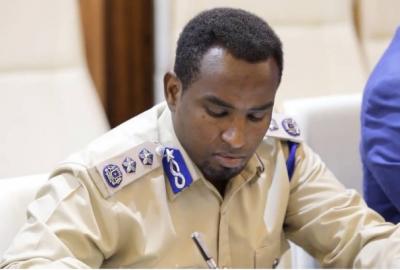 Mr Hassan, minutes before his sacking appeared on the privately-owned Universal Somali TV channel to announce that he had suspended the parliamentary meeting.

He said there should be "no power grab" and the Somali lawmakers should go back to their constituencies and seek re-election.

Shortly after he made the remarks, the Somali police chief sacked him.

"Lieutenant Colonel Farhan Mohamed Adan (Farhan Qarole) has been appointed as the new commander of Banadir region. Farhan Qarole has also been promoted to the rank of colonel," the state-owned Somali National News Agency said in a tweet.

Somali army and police officers have ramped up security in the capital ahead of the special parliamentary session to debate elections that are months behind schedule.

The term of the Somali parliament ended in December 2020 and that of President Mohamed Abdullahi Farmajo on 8 February.

Indirect parliamentary and presidential elections that should have followed are being derailed by political disagreements.

Headlines (Somalia):
Read our other news items below...

Election: US, AU, others urge Somalia leaders to compromise