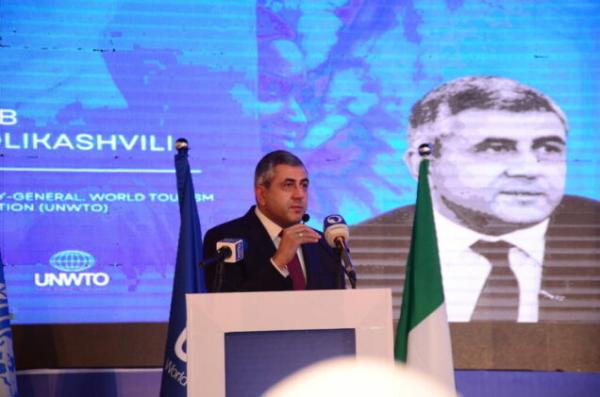 Speaking at a Gala Dinner and Command Performance in Lagos, the UNWTO boss said the regret was that he came to Nigeria without his friends and family members to witness the hospitality, music and top notch cultural performances he and other participants were treated to.

CEOAFRICA reports the gala night is one of the activities lined up for the three-day conference aimed at transforming the tourism sector into a preferred sector, and the creative industry into a creative economy.

“I really regret that I did not come here with my family members and friends to witness all these performances, but I will be back

“That is why people around the world have to come to Nigeria.

“That is why you need more international visitors to come here to see the beauty and see all these authentic culture you have,”” he said.

Pololikashvili expressed gratitude to the Federal Government for accepting to host the conference and wished the country “peace, prosperity, health, wealth and all the best”.

He commended the Minister of Information and Culture, Alhaji Lai Mohammed for his passion for the industry and for his wisdom which he said the Organisation had benefited immensely.

“Nigeria has one of the best tourism ministers in the world and I am sure that the ministers here will agree and they will not be upset with me.

“Thank you Mr Minister for your good heart, for your wisdom for your hospitality because tourism is about hospitality and friendship, nothing else.

Earlier while welcoming the guests to the gala night, the minister said he was not ready to bore them with speeches but to allow them to partake in what the country could offer in the area of entertainment.

Mohammed however thanked his colleagues Ministers from Namibia, Ivory Coast, Congo Kinshasa, Gambia, Togo, Benin, Sierra Leone for honoring him by being at the gala night.

He also thanked all the experts that participated in the workshops as well as everybody who in one way or the other had contributed in making the conference a success.

CEOAFRICA reports the highlights of the night were cultural dances and displays by the Nigerian troupe and dance drama on the unity of Nigeria.

There were also cultural dances of the Ashanti from Ghana, Kikuyu from Kenya and Zulu from South Africa performed by Bolanle Austen-Peters Production.

CEOAFRICA reports that Awards were given to individuals, entities and corporate bodies on culture, tourism, and creativity categories.

Some of the awardees in the culture category are, Ofala Festival which was received personally by the Obi of Onitsha, His Majesty Igwe Nnaemeka Alfred Achebe and some members of his traditional council.

The award given to Argungu Fishing Festival was received by three Emirs from Argungu Emirate in Kebbi state while the Osun Oshogbo Festival also received award on the culture category.

The highpoints of the night was the christening of Pololikashvili with three Nigerian names, Danladi, Anaemeka and Omotunde.

The Secretary-General, his team, Mohammed and other tourism ministers at the gala nite also thrilled the audience when they danced to Nigerian ace musician, Kizz Daniel’s hit song, “Buga’’