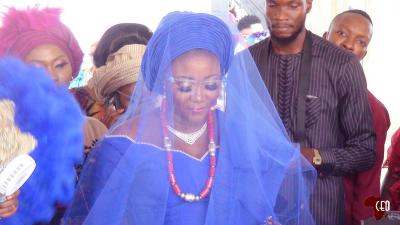 The event which was honoured by prominent Nigerians and well wishers was held at Royal OAKS EVENTS CENTRE, Lekki-Epe Express Road Lagos State

Speaking with CEOAFRICA correspondent at the event, the father of the bride and the former Oyo state commissioner of police, CP Olukolu expressed his joy and described Marriage as an institution. According to him, “It’s like a bank account, if you don’t deposit love, you cannot withdraw love. When you deposit love you will be able to get love in return. This is another stage in the development of any human.

He added that he is very proud of Ramat and advised her thus: “I want to advise her that it takes a lot of patience, understanding, love cooperation, and the ability to forgive for the marriage to succeed. I wish them every good thing in life that they wish themselves.

However, CP Olukolu who extended his advice to parents out there maintained that security of the family life and upbringing of the children is paramount, stressing to parents that there is need to take care of the children and to bring them up in the way of the lord while also securing a good environment for them.

What is in your mind! Is this man about to stock his shop with cartons of looted COVID-19 noodles? (...
Read More...