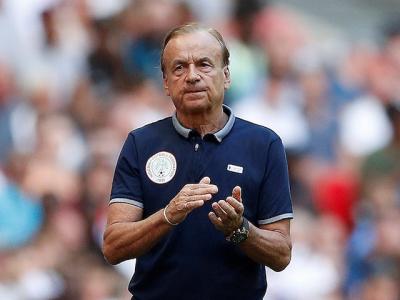 Six new players have been invited by Super Eagles coach, Gernot Rohr, for the team’s friendly matches against Ivory Coast and Tunisia in Austria next month.

CSKA Moscow forward Chidera Ejuke, FC Midtjylland’s midfielder Frank Onyeka, former U-17 captain Samson Tijani, new Porto signing Zaidu Sanusi and SKF Sered goalkeeper, Matthew Yakubu, all got their first Eagles invitation, while Cyril Dessers gets another call-up after he was formerly called up for the initial 2021 Africa Cup of Nations qualifiers against Sierra in March, which were suspended due to the pandemic.

Rohr however has dropped Francis Uzoho, a first choice goalkeeper who just recovered from the injury which he sustained in the friendly against Brazil last October.

Also, the Franco-German ignored the home-based players including Heartland keeper Ikechukwu Ezenwa, who’s been a stronghold in the squad in recent years.

Similarly, FC Koln 25-year-old right-back Kingsley Ehizibue, who was also called up for the botched AFCON qualifiers in March along with Dessers had no place in the coach’s selection.

The Eagles will embattle with the Ivoirians October 9 before meeting with Tunisia four days later.

The friendly games against the two African nations are set as preparations for the AFCON qualifiers against Sierra Leone in the month of November.

Meanwhile, top of the list of invited players are captain Ahmed Musa, the only player outside Europe in the squad, and other regulars William Troost-Ekong, Wilfred Ndidi, Victor Osimhen and Kenneth Omeruo. Others are Samuel Chukwueze, Kelechi Iheanacho, Alex Iwobi and Premier League new boys Semi Ajayi and Ola Aina while Maduka Okoye, Matthew Yakubu and Dele Alampasu are the three goalkeepers.