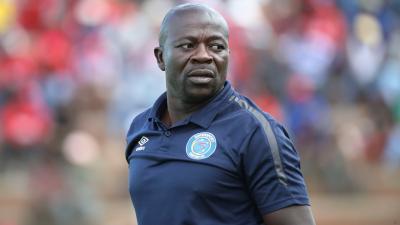 Supersport united coach, Kaitano Tembo felt his side did not deserve to end up on the losing side against Orlando Pirates.

Tembo’s prayer, Teboho Mokoena opened the scoring in the sixth minute but Zakhele Lepasa equalised for Pirates early in the second stanza before an error at the back handed Tshegofatso Mabasa the winner for the Buccaneers in the last three minutes.

"I thought we started very well, we got into good areas, we played a little bit more effective football, in possession and out of possession and we denied them transitions because they always want to play on transitions," Tembo said

“So they could not get the spaces behind, so we did very well. We also got into the areas I think we with a little bit of better decision-making, in terms of choosing the right options we could have done better.

"I think it is one game we didn't deserve to lose but that's how it goes when you don't take your chances, if you don't score goals it's always difficult to win a game."

The Zimbabwean mentor applauded some of the players that returned from injuries, particularly Sipho Mbule, who played his first match of the season.

"Sipho had a fantastic game, he played very well this is his first game of the season but I think he fared very well, I never thought he would play 90 minutes but he played 90 minutes and to me that was positive," he said.

"We didn't have legs a little bit, you know Jones [Lungu] went to Zambia, travelled to Botswana, he only trained on Thursday only. Jamie [Webber] also travelled to Saudi Arabia [with the SA U-23 team], so we didn't really have legs on the bench to try and change the game for us," he added.

Anyone who sees the sexual assault by Baba Ijesha but doesn't see the crime committed by the adults ...
Read More...