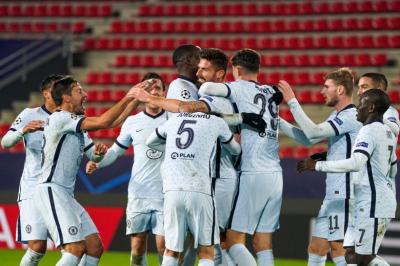 Chelsea reached the last 16 of the Champions League on Tuesday with two matches to spare after a late Olivier Giroud strike gave the Blues a 2-1 win over Rennes.

Chelsea was joined in the next round by Group E rivals Sevilla after the Spanish side won 2-1 at Krasnodar.

Both sides are on 10 points, nine ahead of third-placed Krasnodar and will do battle for first place come the end of the group stage.

Chelsea can concentrate on domestic duties, with Premier League leaders Tottenham Hotspur visiting Stamford Bridge at the weekend, thanks to out-of-favour Giroud, who has been tipped to leave in January as he seeks more regular football ahead of next summer’s European Championships.

Chelsea started strongly and should have been ahead as early as the seventh minute, when Timo Werner flashed Hudson-Odoi’s low cross over the bar with the goal at his mercy.

Their early dominance was rewarded in the 22nd minute following superb play from Mason Mount, who won the ball near his own area before spotting the marauding Hudson-Odoi on the right.

Mount picked out his fellow Chelsea academy graduate with a long pass. The winger took two touches before slotting past Alfred Gomis.

England international Mount was unlucky not to double the away side’s lead eight minutes later when Gomis pulled off a superb save to keep out his close range effort following a Ben Chilwell pull-back.

Edouard Mendy had a quiet start to his return to the club from whom Chelsea signed him in the summer, but the hosts got a foothold in the contest after a rocky opening period.

James Lea Siliki shot over in the 32nd minute after the ball rebounded to him after Kurt Zouma. Rennes then began to cause Chelsea some problems.

Mendy showed the difference he has made to Chelsea with solid saves from Guirassy and Damien Da Silva towards the end of the opening period.

Chelsea thought they had added a second shortly after the break but Werner’s header was ruled offside and Rennes continued to pose them problems.

Mendy made the save of the night in the 73rd minute when he got his body in the way of a powerful Gerzino Nyamsi header, and then pounced to stop a goal on the rebound.

Rennes thought they had punished Chelsea with five minutes remaining when an unmarked Guirassy thumped a header past Mendy.

But Giroud pounced less than a minute into stoppage time after Gomis’ save from another Werner miss bounced up, allowing the Frenchman to head Chelsea into the last 16.