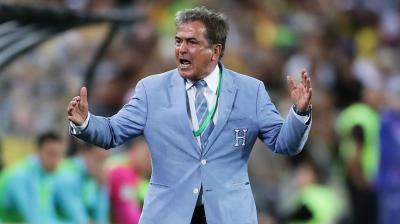 Pinto, a 67-year-old Colombian who led Costa Rica to the quarter-finals of the 2014 World Cup, was the UAE’s fourth coach since January 2019.

“After long meetings with coach Pinto, we agreed that it was difficult to continue our relationship and we decided to terminate the contract,” said the head of the Emirates national teams committee, Youssef Hussein.

“The replacement coach will be announced soon,” Hussein told a press conference, adding that the new coach will be chosen from three people who have worked in the local league.

Under Pinto, the Emirates played three friendlies, beating Tajikistan with difficulty (3-2) and losing to Uzbekistan (2-1) and, most recently, Bahrain (3-1).

“It was difficult to carry out my mission with the national team for several reasons, including a difference of views,” said Pinto.

According to him, the Covid-19 pandemic complicated his work.

“I had big dreams of reaching the World Cup with the Emirates, and I hope it will happen with another coach,” said Pinto.

Pinto succeeded the Serbian Ivan Jovanovic, who was in the job from December 2019 to April 2020, before being dismissed without having played any matches.

Alberto Zaccheroni, who led AC Milan to a Serie A title in 1999 and won the Asian Cup with Japan, quit in January 2019 after leading UAE to the semi-finals of the Asian Cup.

The Italian was followed by former Dutch national coach Bert van Marwijk who lasted from March 2019 until that December when he was fired following a 4-2 loss to Qatar in the Arabian Gulf Cup.