Nigeria   ::   News
o95TMp6FTndLPldcUy0FEVFppw0mQONX
“If anything happens to me, I don’t want anybody to be in doubt, Bala Mohammed should be held responsible”- Ortom cries out
Feb 23, 2021
By: Abara Bleesing Oluchi 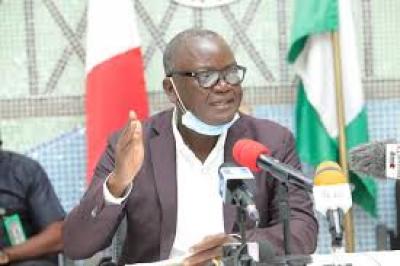 The Benue State Governor Samuel Ortom has urged Nigerians to hold Governor Bala Mohammed of Bauchi responsible if anything happens to him.

Ortom said Mohammed’s defence of Fulani herdsmen carrying AK-47 indicated that he was part of an attempt to assassinate him.

He recalled that herdsmen had written to him in an attempt to assassinate him.

The Governor stated this while addressing journalists in Makurdi, Benue State, yesterday.

Ortom said: “I want to think that, with what he said and what those herdsmen wrote to me and said that they were going to assassinate me, Bala Mohammed is also part of it, with what he has said.

“And if anything happens to me, I don’t want anybody to be in doubt, Bala Mohammed should be held responsible. Especially his last week outing after the condemnable remarks he made about Fulani carrying AK-47 and living anywhere in Nigeria.”

About a week ago, Mohammed accused Ortom of perpetrating hatred against the Fulani in Nigeria.

Meanwhile, Ortom had accused Mohammed of teaming up with killer herdsmen to eliminate people living in some part of the country, including his State.

'We bombed Maiduguri, I don’t have any farm in sambisa forest’ — Shekau to military...
Read More...

“If Makinde continues to disrespect me, I will work against him” –Fayose threatens...
Read More...

Nigerian reacts over comment, says “We are our problem, not Lai Mohammed”...
Read More...