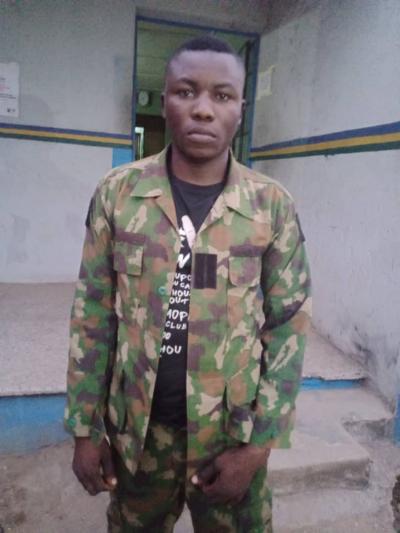 The Lagos State Police Command has arrested one Johnson Godday, ‘M’, in the Nigerian Army Uniform for attacking and robbing some commuters in Ogudu Area of Lagos State.

The Command made this known in its press statement signed by the Police Public Relations Officer, CSP Olumuyiwa Adejobi (mnipr), and was made available to CEOAFRICA.

Adejobi disclosed that the arrest of Godday was on Sunday at about 2251pm, following the report of one Nwanga ‘M’ of No. 24, Bayo Oshinowo Street, Ogudu, Lagos, who while alighting from a tricycle with his friends at Emmanuel street junction, suddenly noticed two men on motorcycle in military uniform, who attacked them and snatched his Infinix smart 5 phone.

Nwanga reported that when they raised an alarm, “the policemen attached to Ogudu Division on duty around the scene came to their rescue and arrested the suspect in Army uniform while the other, also in the Nigerian Army uniform, escaped with the motorcyclist.”

However, the snatched phone was immediately recovered from the suspect.

During Police investigation, Johnson Godday, from Edo State, confessed that he was attached to NA 149 Batallion, Ojo, Lagos before he was dismissed from the Nigerian Army.

The State PPRO further stated that “one pickpocket, who was arrested by the men of Rapid Response Squad (RRS), confessed that he has stolen over 240 mobile phones from Lagos commuters.

“The pickpocket, Ayomide Sikiru, 27, a resident of Akala, Mushin, was arrested around 10:00 p.m. after he successfully picked a Tecno Camon 12 from the hand bag of an elderly woman when she was trying to board a commercial bus to Ojodu-Berger, Lagos.

“The suspect, after stealing the phone, tried to alight from the bus but was restrained by a passenger who challenged him to return the phone he stole. He denied stealing any phone until RRS officers stationed at Iyana Oworo searched and recovered the phone along with an iphone 7 and another mobile phone from his bag. The owners of the phones had been contacted immediately.”

“Sikiru made it known that he has been in the business of pick pocketing for a year and two months after learning the illegal "business" in 15 days from one Sakiru. He also confessed that he operates only on Thursdays, Fridays and Saturdays,” he added.

Besides, Adejobi also disclosed that “the RRS operatives in compliance with the order of the Commissioner of Police, Lagos State, CP Hakeem Odumosu, on enforcement of the curfew and COVID-19 protocols, impounded nine (9) vehicles in Agege.

“The nine vehicles were impounded by the Commander, Rapid Response squad (RRS), CSP Olayinka Egbeyemi, who was also in Agege at early hours of Friday 19th February, 2021, to engage community stakeholders on the security situation in Agege area.”

Adejobi stated that the Commissioner of Police, Lagos State, CP Hakeem Odumosu, has ordered the cases to be transferred to the State Criminal Investigation Department, Panti, Yaba, for proper investigation, while the owners of the impounded vehicles would be immediately charged to the mobile courts at Taskforce office Oshodi.

CP Hakeem Odumosu has, however, vowed to remain resolute in fighting against crimes and criminality in the state.