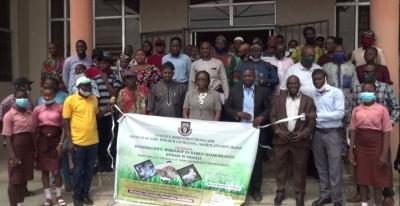 Researchers, rabbit farmers and other stakeholders were all present to discuss first hand experiences  with the disease on their rabbits and ways to mitigate it.

In her goodwill message, the Executive Director of IAR&T, Prof. Veronica Obatolu, disclosed that the workshop was imperative in order to address the disease that is attacking rabbits and causing their farmers to make loss.

Obatolu noted that rabbit, as one of the micro livestock animals, is important to the livelihood of majority of a people in the society due to its nutritional value to the body and zero-cholesterol content it has.

She stated that “Among livestock, rabbit is also important. If we can afford other animals to go into extinction, we cannot allow rabbit to. This is because at a particular age in one’s life, we are advised to refrain from eating certain animal, even chicken. But rabbit is different because it nourishes the body and doesn’t have cholesterol.”

The erudite Professor further stated that IAR&T being a research institute could leave RHD unattended to, that is why the workshop was organised to look for ways the disease can be curbed.

In an exclusive interview with CEOAFRICA, the Executive Director added that the stakeholders’ meeting was both for the farmers and the institute.

“The meeting is for the rabbit farmers to tell us (researchers) about their experience and the symptoms they noticed from their rabbits. Their presentation will be taken to the labouratory and help the institute in its research to find out the cause of the RHD and how it can be controlled.

“The problems highlighted by the rabbits farmers will help us know what to address,” she stated.

She disclosed to CEOAFRICA that the findings will “hopefully” last 6 month.

The first female Executive Director of IAR&T however applauded the Federal Government for funding the workshop, adding that the government had made it possible for the institute to organise such a meeting.

Speaking on the benefits rabbit farming can give to teeming youths awaiting employment opportunities, the Deputy Director of IAR&T, Dr. Olaide Saka, revealed to CEOAFRICA that rabbit farming is “practicable and attractive.”

Saka explained that “the requirement needed for rabbit farming in term of space is minimal. Any amount invested in rabbit farming, there is assurance that the farmers will get return within a short duration.

“This makes the enterprise attractive to the youths and our women.”

Besides, the coordinator of the stakeholders’ meeting, Prof. Boye Omole, while speaking on the economic value of rabbit farming, made it Known to CEOAFRICA that it can be sold for #6, 000 to #8, 000, adding that the gestation period of rabbit is 30days.

“This farming has high economic value, because one rabbit as of today can be sold for six –eight thousands naira

“Aside this, it is different from other animals because of its gestation period which is just 30 days.

“This makes it possible for farmers to have up to 60 rabbits within a year.”

He noted that the institute organised the workshop because of the economic and dietetic importance placed on rabbit.

Omole further affirmed the Executive Director’s claim that the results of the research, which has already been embarked on by the institute to find out the cause of RHD will be out in the next 6 months.

According to Prof. S.A Olakojo, he expressed that the stakeholders’ workshop was timely as it was organised in a season Rabbit Haemorraegic Disease is rampant.

A rabbit farmer who narrated his experience, Mr. Wale Obi, recounted that he lost about 12 rabbits to the disease.

He narrated that “Sometime last year, I saw blood coming out from the nose of one of the rabbits. All of sudden it started shivering and died. Few minutes later others began the same and died. In the space of 3hours, I lost 12 rabbits.”

Obi however expressed gratitude to the Federal Government and the management of IAR&T for organising the workshop, noting that it exposes him to other ways he can manage his rabbits farming.

Rabbit farmers, stakeholders and students present at the meeting poured out praises to the management of the Institute of Agricultural Research & Training (IAR&T) under the leadership Prof. Veronica Obatolu for organising timely workshop on the Rabbit Haemorraegic Disease, enlightening the farmers on how best they can prevent the diseases and/or control it.