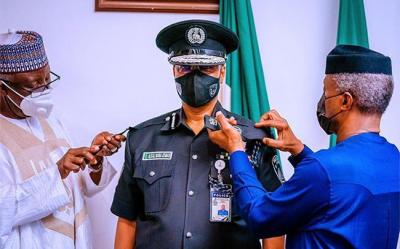 Nigeria-Thursday 8 April,2021: The Acting Inspector-General of Police Usman Alkali Baba began his tenure on Wednesday with a promise to confront “increasingly, complex and pervasive security threats” in the country.

He listed them as “terrorism, banditry, kidnapping, secessionist agitation and sundry organised crimes.”

Baba, 58, who was appointed on Tuesday, spoke at the Force Headquarters in Abuja after taking the reins from Mohammed Adamu.

Following his decoration at the State House by Vice President Yemi Osinbajo and Police Affairs Minister Muhammad Dingyadi, Baba was driven into the Louis Eder House at about 2:18pm in a Toyota Prado Sport Utility Vehicle (SUV).

He inspected the quarter guards before moving to the conference room where the erstwhile IG gave him the handing over note and the police flag to symbolise the transfer of authority.

Baba said: “Much as the challenge of leading the Force to address these threats in the shortest possible time frame, restore security order, and return our beloved nation to the path of national unity may appear daunting, I am inspired by the fact that from my extensive years of service, I can confidently say that the Nigeria Police is endowed with some of the finest, courageous and patriotic officers who, undoubtedly, shall support me to advance the internal security vision of Mr President.”

To achieve the task, Baba told reporters at the State House that “definitely, we are going to rejig our operational strategies.”

He asked Nigerians to “expect improvement in the security situation” and urged them to “collaborate and cooperate with us.”

Asked how he hopes to improve on community policing from where his predecessor left, Baba said: “We will continue to practicalise it. My predecessor has left it at the theoretical stage, we have started practicalising it but we have not gone far and therefore all the methods of practicalising it has been put in place and we are going to continue with it in collaboration with other stakeholders.”