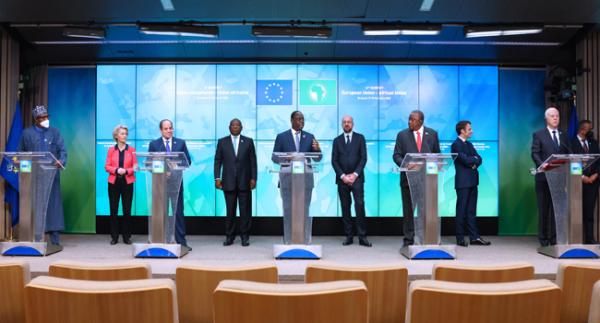 President Buhari spoke on Friday in Brussels, Belgium, during a roundtable discussion on peace, security and governance at the ongoing sixth EU-AU summit.

Between August 2020 and January 2021, four military coups have been recorded in Africa.

The latest occurred on February 1, when there was an attempted coup in Guinea Bissau.

The president called on European leaders to embrace partnerships with African countries to promote democracy, and support measures put in place by the African Union to stem the tide of unconstitutional leadership changes.

“Africa has continued to witness different waves of violent extremism, community-based conflicts and inter-ethnic tensions, notably in rural areas. For many decades, our continent has been deprived of political stability and socio-economic development due to terrorism and violent extremism,” Buhari said.

“More worrisome is the current state of democracy on the continent, which has become a great source of concern to many of us, with increasing cases of unconstitutional change of governments across the continent, particularly in West Africa. This is in addition to the challenges posed by COVID-19 pandemic.

“As leaders and policy makers, it is important for our partnership to place priority on tackling the root causes of conflicts in Africa, as well as taking measures in safeguarding peace and security, if we are to achieve the African Union Agenda 2063.

“We also call for stronger support from the European Union in the condemnation and imposition of weighty sanctions on countries that engage in unconstitutional change of governments, as well as manipulation of constitutions in favour of extension of term limits.”

The Nigerian leader added that it is imperative to ensure that election processes in Africa have outcomes that truly reflect the wishes of the electorate, adding that contrary actions could lead to instability.

The president also asked European leaders to translate their promises of cooperation to actions.

“We have a responsibility to reduce conflicts that stem from lack of good governance, unaccountability, corruption and social exclusion,” he said.

“I wish to underscore the need to convert our pledges on political cooperation in the area of peace, security and conflict prevention into concrete initiatives such as joint field missions, shared understanding and analysis on crisis situations, as well as joint early action and swift implementation of agreed positions.

“The movement and operation of terrorists and violent extremist groups along the Sahel could better be addressed through an improved continental early warning mechanism.

“Consequently, we believe there is a clear need to strengthen our cooperation on security with the European Union, particularly through improved intelligence sharing and acquisition of military equipment and hardware.

“We invite the EU to upscale its support for the G5 Sahel and the Multinational Joint Taskforce in the Lake Chad region as we strive to further degrade the Boko-Haram insurgents and their Islamic State in the West Africa Province counterparts.”