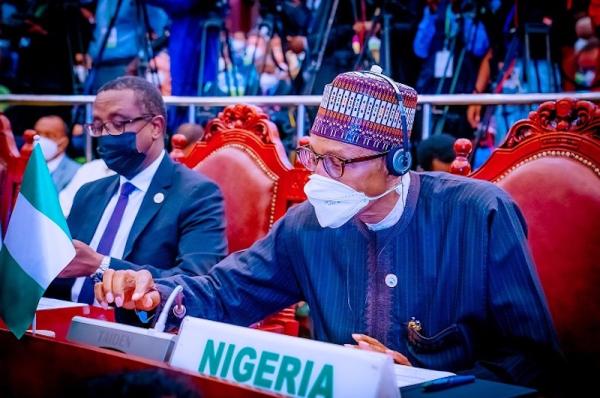 Nigeria President Muhammadu Buhari on Saturday in Malabo, Equatorial Guinea, said the desire of some leaders to remain in power, after completion of their constitutional terms in office, easily results in violence, loss of lives and displacements across the continent.

He urged a stronger position by the African Union (AU).

At the 16th Extraordinary Session of Assembly of Heads of State and Government of the African Union, holding at Sipopo International Conference Centre, the President noted that attempts at tenure elongation by some leaders reversed the gains of democracy and good governance in Africa, and served as recipe for volatility and violence.

President Buhari advised leaders to consider strengthening democratic structures and cultures by adhering to the constitution.

“Mr. Chairperson, let me start by thanking the Chairperson of the Commission for the comprehensive report we have received on Unconstitutional Changes of Government in Africa. We are equally grateful to H.E. Julius Maada Bio, President of the Republic of Sierra Leone for his lead intervention on this pressing continental issue, especially for those of us in West Africa, where the spate of Unconstitutional Change of Government have been increasingly alarming.

“Your Excellencies, as you are aware, in the past couple of months, we have witnessed a spate of unconstitutional changes and a return of military incursion in the continent. This situation is totally unacceptable. It is an attempt to draw the continent backward and derail the great mileage we had gained over the years in our quest for sustainable democracy.

“In the West African region, the ECOWAS Heads of State and Government have not shied away from taking appropriate steps and measures to curtail this unpleasant trend. I dare say that we have demonstrated great political will, in out-rightly condemning military incursions and unconstitutional Change of Government wherever it occurred,’’ he said.

The President said far-reaching sanctions were imposed on ECOWAS countries that had unconstitutional change of government, when it became necessary, adding, “It is therefore imperative to call on the African Union Heads of State and Government to express the same level of Political Will to ensure that this unfortunate trend especially in Mali, Guinea and Burkina Faso is curbed.’’

“We must work collectively to ensure that constitutional democracy is restored to these countries as quickly as possible. There should be no room for unconstitutional change of governments in the continent.

“I reiterate that the resurgence of coup d’etats in our continent calls for deep introspection on our parts as leaders. It requires our better appreciation of the root causes of military incursion into our politics.

“As African leaders we have a duty to provide good governance to our citizens, address cases of extreme poverty and engender peaceful, free and fair elections in our countries. We must shun all calls for tenure elongation beyond the provisions of our respective constitutions,’’ the President told the African leaders.

According to President Buhari, calls for tenure elongation, undoubtedly, only contribute to heating up the political climate and serves as catalyst for crises and political instability.

“Mr. Chairperson, in concluding my remarks, I would like to make a clarion call for a coordinated continental response that condemns all forms of unconstitutional Change of Government in Africa. Let us rise to the occasion and reject such changes as well as support imposition of far reaching sanctions regime from all African Union Member States, whenever and wherever military incursions rear their ugly heads.

“We should also get the International community to buy into and cooperate fully with the African Union in imposing coordinated measures on those countries violating constitutional order,’’ he said.