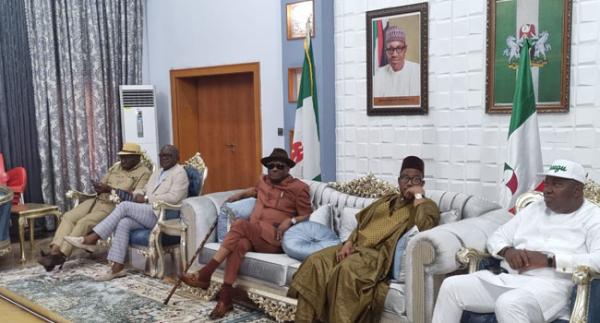 Four members of the G5 governors of the Peoples Democratic Party (PDP) are in a closed-door meeting with the Governor of Bauchi State Bala Mohammed in Bauchi.

The four G5 governors in the meeting include Nyesom Wike of Rivers State, Samuel Ortom of Benue State, Ifeanyi Ugwuanyi of Enugu State, and Okezie Ikpeazu of Abia State.

Governor Seyi Makinde of Oyo State who was with his G5 colleagues to inaugurate some projects completed by Ortom in Benue State on Monday, was, however absent from the meeting.

Wike says they are on a solidarity visit to Governor Mohammed and to also discuss ways they can intervene regarding some challenges surrounding his (Bauchi governor’s) re-election bid.

On his part, Governor Mohammed appreciated the show of concern and said some of the issues as anti-party challenges and treachery in the state. He added that he is also willing to confide with the integrity group (G5) about his fears and worries.