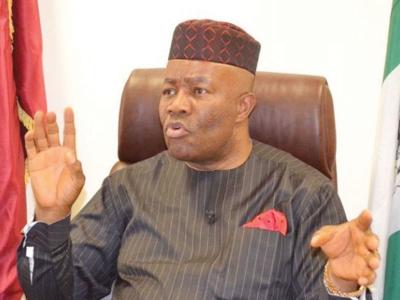 The Minister of Niger Delta Affairs, Senator Godswill Akpabio yesterday held a series of meetings with some stakeholders in the National Assembly over the ongoing investigation of the Niger Delta Development Commission.

Akpabio was at the offices of the acting Clerk to the National Assembly, Olatunde Ojo; and Chairman of the House Committee on Niger Delta Affairs, Olubunmi Tunji-Ojo, where he met with them separately behind closed doors.

Both the Senate and the House are probing the alleged illegal spending and mismanagement of N81.5bn by the NDDC under Akpabio’s supervision as minister.

The committee had only laid its temporary report in which it indicted Akpabio and the NDDC management, while the House decided that the panel will continue with the probe and present a comprehensive report.

The investigation became dramatic when Akpabio alleged that the NDDC awarded 60 per cent of its contracts to National Assembly members. Then, the Speaker, Femi Gbajabiamila, confronted the minister to provide evidence, and Akpabio had named some members, but the lawmakers denied the projects listed against their names.

After the meeting with the National Assembly clerk, Akpabio was asked on the charge by Gbajabiamila for him to present proof of his allegation. He said: “No, no, no, you are wrong. That was not what the Honourable Speaker demanded. The Speaker wanted to know whether there was undue influence from any section of the National Assembly in respect of contracts in the NDDC. He did not say whether they were contractors. So, I’m hearing it from you.”

While speaking on the clash between him, the NDDC and the National Assembly, the minister blamed it all on mischief.

Akpabio met with the chairman and some members of the House Committee on NDDC, including the spokesman for the House, Mr Benjamin Kalu while the meeting started at about 3.40pm and lasted till almost 7pm.

IMSU management to probe lecturer who was arrested while allegedly trying to sleep with a student...
Read More...

No going back on strike action until Fed. Gov meets our demands- ASUU...
Read More...