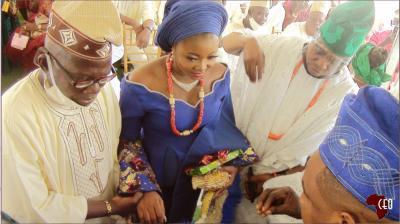 Prominent Nigerians and well wishers joined the former Oyo State Commissioner of Police, CP Shina Olokulu in celebration over the weekend as he gave his daughter, Bolanle Ramat out in marriage to Oluwaseun Jeremiah, son of Mr. and Mrs. Adekunle Macarthy in Ikoyi, Lagos.

CP Olukolu who spoke with CEOAFRICA news reporters at the event center in Lagos said he could not contain his happiness as his well trained daughter was leaving him for good.

The CP who described marriage as an institution that should be respected and showered with love, advised the couple to attend the institution with patience, understanding, love cooperation, and forgiveness.

Thank you everyone that showed up, participated, gave us money, and their time- Mrs Marcathy Ramat

The couple during an interview with CEOAFRICA at the event thanked all those who made the occasion possible as Ramat Marcathy said, “I thank God for everything. This wedding was supposed to hold in April but because of the lockdown was postponed. Thank you everyone that showed up, participated, gave us money, and their time.”

Her husband joined his wife in one accord as he also said thank you to everyone for the love and support.

Guests and well wishers present took out time to congratulate and advise the couple on how to live with each other in order to have a peaceful and fruitful home.

I pray for the marriage to last forever - Prince Oyodele Oyekan

One of the bride’s relations, Prince Oyodele Oyekan, Bajulayo of Lagos who prayed that God should give them abundant blessings said, “I pray for the marriage to last forever. God should bless them with many kids.” He also advised that “They should never listen to hearsay either from the family of the groom or the family of the bride, even their friends. They should lock themselves in their room; speak the truth to each other. If you want the marriage to last share and sacrifice for each other.”

AIG in charge of Zone 2, Onikan Lagos, AIG Ahmed Iliyasu said:  “I’m highly elated; it’s a joyous day for me to be here. I’m wishing the couple a divinely, peaceful marriage. Now they are transforming into another part of life which is marriage. Dduring this transformation they have to be patient, they have to understand each other.”

He also advised the Nigerian youths saying that everything about life is attitude. He said youths should imbibe attitude of service, patriotism, integrity and simplicity and should have that value of serving our nation and our people adding that youths should be able to identify Nigeria’s unique values and show respect to her leadership.

CP in charge of Forensic Force and CID Annex, Alagbon Group, Lagos, Mansur Mohammed urged the couple to respect each other and added that “They have to be very patient with each other. There has to be an understanding”

He however said that “CP Olukolu has accomplished something which every parent wants to achieve. So I say a very good congratulations to him. I hope and pray this marriage will last forever.”

I will like to advise them to be prayerful - Rev. Peter Omotoye

Chairman, Police Community Oyo state Command, Rev. Peter Omotoye said: “Forever they will continue to remember it for good. The spirit of light and the spirit of love will continue to guide them and stay with them.” He then advised the couple as he said: “I will like to advise them to be prayerful. They should understand themselves better than before. There should be spirit of perseverance and endurance. They should try to take good care of their parents.”

Kabiyesi Adetunji Akinloye, Alanua Ajani, the Ojomu of Ajorunland Satini II enjoined the couple to obey the laws of the land and said he expects the man to tolerate the wife while they hold on to love, prayer and dedication.

They must have fear of God - Rtd DIGP Peter Babatunde Ogunyanwo

Rtd DIGP Peter Babatunde Ogunyanwo in his words said: “I wish them a happy married life. Marriage is about cordial relationship, godliness, trust and believing in themselves and tackling their issues together. They must have fear of God, love one another, and solve their problems together without third party. They must live within their income; the husband must be very patient while the while must be obedient.”

Babatunde also extended his advice to Nigerian youths as he said that it’s unfortunate that there is moral decadence in all aspect of Nigerian lives adding that it is an all-round problem degenerated from the moral decadence of values from homes. He said parents must teach their children morals that will be useful for the nation so that we can have leaders in the future.

Marriage is about giving and taking - Pastor Mrs Iyabode Olaitan

Pastor Mrs Iyabode Olaitan who was also present at the event said, “There is a great difference between wedding ceremony and marriage. The couple will face the reality of their marital life after the couple goes home, but in coming together like this, the first thing they need is God. ‘Except the lord builds the house those that build it labor in vain.’ If they are able to make God the foundation of this home, then his grace will see them through. They must be prayerful, united, not allow third party interference, they must understand one another, it is about giving and taking.”

She further gave her piece of advised to the youths  who are looking forward to building happy homes as she stated that there is a standard for home building and the Lord has laid it down; thus any attempt to utter that standard will create problem and confusion. “God says the husband is the head and the wife the helpmate. If everybody can stay at her duty post, all shall be well. The woman should stay at her duty post of building her home, training her children and supporting the husband,” she said.

CP Olashopo Ajani, from Commanding Police College Ikeja in his words said; “I wish the latest couple in town the best of everything they wish themselves. They should always be patient and should endure a lot because nobody is perfect. When the time is odd, they should always remember their marriage vow that for better, for worse they must be for each other.”

Aare Bashiru Olawale Fakorede, Aare of Ikate land was not left out in encouraging the couple on how to live in marriage. He said the couple should not allow any intruder either friend or family but should always settle their differences before going to bed.

Lagos CP, Hakeem Olusegun Odumosu, stressed that the couple should always trust in God with trust, love and perseverance of each other and should expect ups and down of life but should conquer these with trust.

Patience is the ultimate of the whole thing -  Mr Ben Marcathy

Elder brother to the groom, Mr Ben Marcathy was not left out in his words of advice. Having wished the couple fruitfulness, he said that patience is the ultimate of the whole thing,  telling his younger brother that he must be patient with his wife because the antics of women will manifest in his home.

CP Edward Awolowo Ajogun, CP Ogun state said: “The groom is lucky to have had a daughter from CP Olukolu.” He added that he expects the groom to put up the best attributes of the father-in-law in terms of calmness, patience and friendliness.

“They must take into consideration the challenges of contemporary time especially in terms of economy. They should be able to use their experience, orientation and upbringing to manage the crisis that most marriages are being confronted with as a result of external forces,” CP Ajogun said and advised parents not to relent in monitoring the activities and conduct of their children outside the home.

Helen Arhagba Rewani, Drinks Consultant, in her motherly advice said: “There should be no third party. There’s no marriage without turmoil. They should have Christ in the middle of all. That love can never be shaken when they build it on Christ.”

Apostle Kehinde Adewale Sowemimo, Chairman PCRC Lagos State Command stated: “We want to wish the couple a very bright future, a very successful and happy married life. We want to advise them to be tolerant with each other.”

There will be times of ups and downs but if they understand themselves, they will overcome - Rev Charles Ahamefule Eze

Reverend Charles Ahamefule Eze, friend to Seun explained marriage from the religious standpoint and said: “Marriage needs a lot of patience, a lot of love. There has to be some mission on the part of Bolanle and on the part of Seun, love. There will be times of ups and downs but if they understand themselves, they will overcome. So I wish them the best in marriage.”

Stella Gbolawu Sodeinwale, friend to the bride said the couple is a set of nice personalities coming together and added that: “I wish the couple happy married life, I wish them the best, I wish that they will be friends to each other till death do them part. I advise that the husband should be patient with his wife and the wife should be submissive to her husband.”

Mrs Fatimah Kyari Adebayo prayed for the couple thus: “I pray this relationship will keep long till old age. With the love they have for each other, I advise them to keep up together,” and advised that they should not allow loquacious talkers to come in between them.

JUST IN: Police in Lagos ban all forms of protest...
Read More...