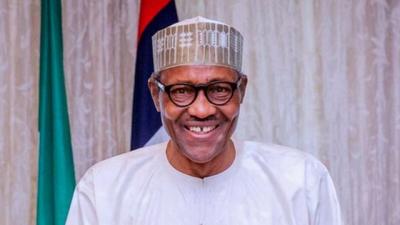 “We urge the international community to renew efforts to stem this traffic and promote the Arms Trade Treaty.

“This is to codify accountability in the on-going battle against trans-border crimes, including terrorism and acts of piracy.”

The Nigerian president also brought to mind the world of the “litany of terrorist attacks across the globe” which he described as a “harsh reality of the challenges the world is facing today.”

He noted that the problem could only be solved through international collaboration and solidarity and added: “In Nigeria, we are still facing violent extremism from the insurgency of Boko Haram and bandits.

“We continue to count on our strong cooperation with UN counter-terrorism bodies and neighbouring countries to overcome the terrorists in the Lake Chad Basin and the wider Sahel Region.

“We will vigorously sustain the rehabilitation, reconstruction and resettlement of victims of terrorism and insurgency in the North-East.

“The North-East Development Commission has been established for that purpose.”

The Nigerian President also mentioned Nigeria’s position on other global challenges to include the COVID-19 pandemic, illicit financial flows and nuclear production.

Pertaining to COVID-19, the president joined other world leaders at the forum in calling for “uninhibited supply of safe and effective coronavirus vaccines for all.”

Reports said that the call for global solidarity against the pandemic highly featured in all the statements delivered on Tuesday.

While some developed countries pre-order millions of doses of potential COVID-19 vaccines from pharmaceutical companies, the developing world watch helplessly; this move has come to be known as “vaccine nationalism,” and it is a source of concern to the UN and other stakeholders who fear that this would leave the poor countries helpless, and undermining efforts to end the pandemic.

In a statement by the UN Secretary-General Antonio Guterres, he noted that “vaccine nationalism” is not only unfair but also self-defeating.

President Buhari however condemned the lack of global solidarity in the battle, urging the UN to “marshal an inclusive response to the pandemic”.

According to him, failure by the orgainsation in this direction means failure in its “core mission of giving expression, direction and solution to the yearnings of the international community.

In reaction to the illicit financial flows, the president called for an revamp of existing international structures that undermine countries’ efforts to “generate and retain their financial resources.”

Speaking further, Buhari expressed Nigeria’s commitment to ongoing efforts by the UN to rid the world of nuclear weapons as he said: “We recall the adoption of the landmark Treaty on The Prohibition of Nuclear Weapons, which opened for signature on 20 September 2017.

“Nigeria participated actively in the processes leading to its adoption and was an early signatory and ratifier.

“With less than ten ratifications needed for the TPNW’s entry into force, we urge other member states who have not done so to quickly ratify the Treaty for the actualization of its important objective.”

#EndSARS protest, looting of palliatives an agenda for 2023- Yahaya Bello

# EndSARS: "Judicial Panels Must Investigate All Incidence Including Lekki Shooting"

Palliatives in warehouses is proof that Buhari is not our problem- Buhari’s daughter...
Read More...

Submerged communities in Rivers cry out to the Govt...
Read More...