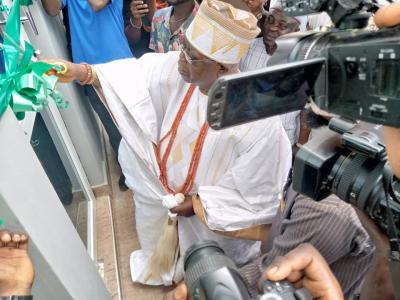 According to FOBTOB National President, Comrade Quadri Olaleye, the hostel was constructed to provide a standard and conducive accommodation for students of the Federal University of Oye-Ekiti, so that they can pursue their academic goals with ease.

The Oloye of Oyeland, Oba (Sir) Michael Oluwole Ademolaju Adugbole III, who was the royal father of the day, did the commissioning in grand style.

While commending FOBTOB for the million naira fire control installed in the building, he also praised the aesthetics of the building saying, “It is so good, so beautiful”.

Oba Ademolaju further expressed surprise at how well the association functions, and encouraged the association to go into more housing for the community, not just for students.

He said, “We are accommodative, we want things like this to continue”.

Also, the governor of Ekiti State, Kayode Fayemi, was ably represented at the ceremony by his Senior Special Adviser on Labour matters, Chief Oluyemi Esan.

Commending FOBTOB leadership, Esan said, “His Excellency was not surprised that crop of leadership have lived above board to achieve this wonderful feat”.

He added that, “It is not gainsay to commend TUC at the National and State level for the mature way of handling the welfare of their members and nation as a whole.

“It is the prayers and wishes of this government that we continue in this cordial relationship, to enhance better life for workers.”

Recall that CEOAfrica had earlier reported on the National Executive Council meeting of FOBTOB on Thursday, which was a huge success that saw some members winning the 200,000 naira awards for excellent leadership at branch level and all of the members getting their certificates of participation and training.

At the meeting, members of the National Executive Council paid glowing tributes to the leadership of Comrade Quadri Olaleye for the transparency of his administration and success of the construction of the new student hostel.

Oladele Alice Opeyemi said:
Please, how much is the hostel
Leave your comments below: