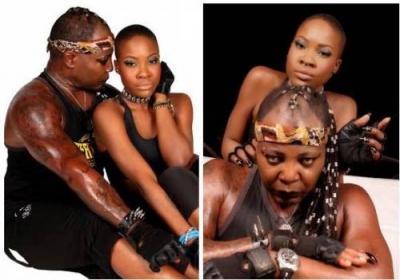 Veteran musician, Charles Oputa, aka Charly Oputa, and his daughter, Dewy, relationship seem not to be at its best at the moment.

The ‘Fake Pastor’ singer took to his Instagram page on Friday to state that he experienced a wide range of emotions when Dewy first came out to him that she was homosexual.

He stated that though he often advocated for the rights of ‘queer’ people, he was initially taken aback. He went on to say that he finally came to terms with it and is proud of his daughter.

His post read in part, “As a matter of fact, I now look back and find that I am grateful for the experience of having a gay (lesbian) child. All I want for my princess are love, happiness and success.

Charly Boy’s post was flooded with lots of comments, with many commending his unconditional love for his daughter.

However, hours after his post, his daughter called him out on Twitter, claiming that her father no longer picked her calls. She wrote, “’Gaslighting’ at its finest. It is quite unfortunate that my life is nothing but content. I just cannot wrap my head around the hypocrisy. All this for a drop of clout, attention and praise from strangers just to feed your ego.

“Honestly, I was going to just ‘free’ this situation because I’m used to this toxicity and mentally I’m tired. But after seeing this, I cannot stomach this pretentious behaviour anymore because normally, this man does not pick my calls.”

She continued, “In 2017, I got kicked out of the house and was almost homeless. But for my friend, I wouldn’t have had food or shelter.

“Fortunately for me, I had a return ticket to Atlanta (United States of America), I moved back here with zero dollars not even knowing where I was going to live or where my next meal was going to come from.

“I was literally living from couch to couch and Lord knows how tirelessly I worked so I could have my own stability.

“You did not even know if your daughter was dead or alive. Anything could have happened to me.”

Efforts made to speak with Charly Boy proved abortive. He did not respond to calls made to his phone.

Marriage is not about finding someone u’re compatible with but dealing with the incompatibilities-...
Read More...