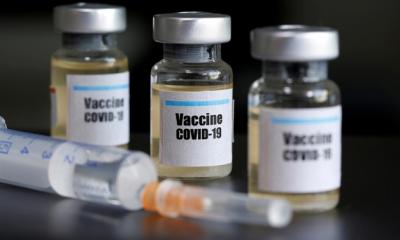 The second batch of the Chinese coronavirus vaccine produced by the Chinese company Sinopharm arrived in Egypt on Tuesday. The batch includes 50,000 doses, bringing the balance of the Ministry of Health to 100,000 doses sufficient for 50,000 people.

The vaccination process is scheduled to start with the first dose, followed by the second dose after 21 days.

Official sources at the Ministry of Health and Population told Egypt Today that a vaccination plan is being developed to include the first groups of vaccinations, adding that work is underway to establish a website to register those who wish to receive the vaccine.

The sources added, "We aim to provide 10 million doses of the Chinese vaccine, as Egypt will be receiving more doses during the current month in a row."

"It is not possible to use any vaccine except after making sure of its effectiveness and safety for humans," the source stressed, noting that the new Corona vaccine that Egypt received is safe and it is the same vaccine that more than 3,000 volunteers have recently received with no health complications reporter

According to the source, 86 percent of those who were exposed to the coronavirus after receiving the vaccine did not get sick, and 14 percent showed only slight symptoms. Some 99% of those who received the vaccine produced antibodies

The Sinopharm vaccine has been tested in more than six countries, including Egypt, on 45,000 volunteers, after verifying its effectiveness and safety, and obtaining emergency approval as approved by the World Health Organization.

The Ministry of Health confirmed earlier that the 45,000 volunteers who underwent scientific experiments for the vaccine did not prove any unexpected complications in any case. Sinopharma vaccine, like any other vaccine, causes a high temperature for two days, about half a degree, and no complications have occurred because of it so far.

The Minister of Health Hala Zayed also indicated that the state possesses medical refrigerators capable of saving 110 million doses of the vaccine, saying: “We have launched medical campaigns nationwide; many citizens have been treated, furthermore, the initiative of Health for 100 million has produced a health database for Egyptians.

"The vaccine will be a free charge for all Egyptians because treating the coronavirus is the responsibility of the state," she stated.

The Egyptian Health Ministry said on Dec. 10 night the first batch of the Chinese vaccine arrived at the Cairo International Airport, coming from the UA

Sinopharm’s vaccine, according to UAE and Egypt, has an 86-percent efficacy against the coronavirus. It has been involved in clinical trials in Egypt over the past few months. Minister Zayed was one of the volunteers.

COVID19: 20 African countries to get vaccines from next week...
Read More...