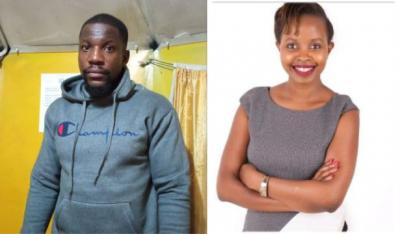 Christian Mwambay Kadima (pictured), who has been on the run since the wee hours of the morning, following the gruesome murder of a prominent city lawyer was smoked out of his hideout, in a city lodging hours after the gruesome murder.

“Detectives who have been trailing the suspect smoked him out of his hideout at a lodging in the city,” said DCI on Saturday.

The suspect is reported to have driven himself to Riruta before heading to a city lodging where he hid.

Kadima who was living with the deceased was spotted in the victim's house on Thursday night.

The body of the lawyer was found in her bedroom on Friday morning.

According to the detectives, the incident was confirmed by the lawyer's house help, who became suspicious that her employer was not awake at 10am.

“The house help grew suspicious when by 10am, her employer hadn’t woken up. She went to her bedroom only to find her body on the bed with bloody bruises.”

The suspect is in police custody and will be arraigned once investigations are completed.

Headlines (Kenya):
Read our other news items below...

Nigerians react over another trending video of LAUTECH lecturer caught having sex with student...
Read More...

Northern elders dissociate themselves from Gumi over allegations made against Nigerian military...
Read More...

How a Nigerian lady Oyindamola Akinrinola was convicted in US for online fraud...
Read More...

Nigerian reacts over comment, says “We are our problem, not Lai Mohammed”...
Read More...