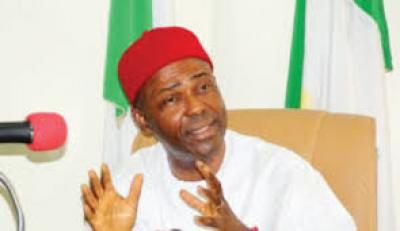 The Minister of Science and Technology, Ogbonnaya Onu, has said that President Muhammadu Buhari means well for Nigeria as he is fulfilling the promises he made without minding the fall of the country’s revenue.

The Minister, on Tuesday, said this at Uburu in Ohaozara Local Government Area of Ebonyi State while addressing newsmen after revalidating his membership of the All Progressives Congress (APC).

He said “Buhari means well for Nigeria because he is keeping many of the promises he made not minding that he came at a time when national revenue was on the decline.

“Before now, crude oil was sold at 100 dollars per barrel and you know what it has been since he came to power, hovering around 60 dollars and this has been one of the best in about five to six years now.”

“And you can see that the administration of Buhari is working very hard to make sure that all the promises made are kept. We were just at the second Niger bridge, this is a project that has been on for a very long time.

Onu commended the president for sacking and appointing new Service Chiefs adding that the government is winning the war against insecurity ravaging the entire country.

He also urged Nigerians to give the president their trust, stressing that trust is important if any government must succeed.

COVID-19: FG not in control of when vaccines will be delivered to Nigeria, says Health Minister...
Read More...