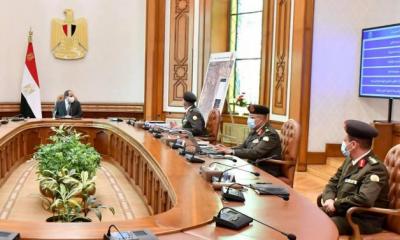 Egyptian President Abdel Fattah El Sisi urged continuing construction work in the New Administrative Capital, East of Cairo, so that it is finished in a comprehensive manner within the planned timeframe.

The president, in a meeting with officials on Monday, also called for highly caring about the green areas and civilizational organization inside the new capital so that the image of the modern Egyptian state is reflected, the presidency said.

The president during the meeting also reviewed the plans to develop the area known as the “4.5 kilometer” area on the Suez road, which includes the slums of Ezbat El-Haggana.

The president also ordered naming the area “The Hope City” so that to “reflect the endeavors to change its situation to the better by the state,” the presidency added.

Sisi was also briefed on a number of national projects during the meeting, including the workflow to execute the first phase of developing 1,500 villages nationwide. This is part of a governmental project to develop the countryside in various fields.

According to the Ministry of State for Information, the project’s current phase aims at developing 1,500 villages inhabited by 18 million people.