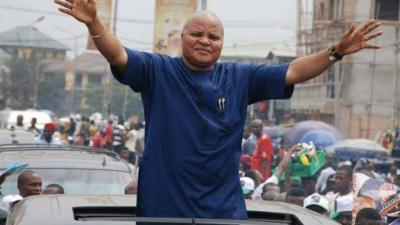 Justice Taiwo Taiwo, in his judgment, held that Ararume remained the authentic candidate of the All Progressives Congress (APC) in the election as at today and should be declared winner of the election.

The judge also ordered the Independent National Electoral Commission (INEC) to issue a Certificate of Return to Ararume within 72 hours from the delivery of the judgment for him to be formally inaugurated by the Senate President.

He dismissed the preliminary objection filed by the APC and one Chukwuma Francis Ibezim challenging the jurisdiction of the court to entertain Ararume’s suit.

The judge held that the objection lacked merit because Ibezim being purported by APC as its candidate in the by-election had been disqualified by a Federal High Court and later Court of Appeal for supplying false information to INEC to secure clearance for participation in the election.

Ararume had, through his counsel, Ahmed Raji (SAN), told Justice Taiwo to invoke the judgments of a Federal High Court and that of Appeal Court to disqualify Ibezim and declare him as the rightful candidate for APC.

Raji said that the judgments of the High Court and later the Court of Appeal have conclusively disqualified Ibezim and cannot claim to be an aspirant or candidate in the Imo North Senatorial election.

In opposing Ararume’s suit, APC had told the court that it never fielded Ararume for the last year December senatorial by-election for Imo North Senatorial district of Imo State.

The party had insisted that Ararume lacked the locus standi to lay claim to the candidacy because he did not even come second in the primary election for selection of the party’s candidate.

The APC then urged the court to dismiss the suit.

Ararume had dragged the INEC, APC and Ibezim before the Federal High Court praying for an order to compel INEC to recognize him as the APC senatorial candidate in the election won by the APC.

He claimed that Ibezim, having been disqualified by a Federal High Court on account of supplying false information to INEC to secure clearance and the disqualification having been upheld by the Court of Appeal in Abuja had knocked off Ibezim from laying any claim to the outcome of the by-election.