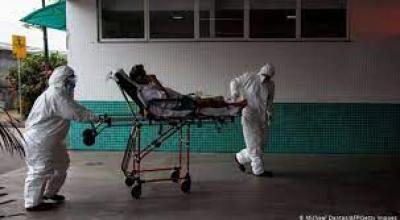 Brazil, for the first time, has recorded over 4,000 deaths from COVID-19 in 24 hours, becoming the third country to exceed that number.

The country’s health ministry on Tuesday, said 4,195 deaths from COVID-19 were reported in the past 24 hours.

Since the start of the pandemic, Brazil has recorded over 13 million COVID-19 infections and now has a total death toll of 337,000, which is second only to the US.

Ninety-two new variants including the P.1 variant, which have been detected in the country, have become a cause for concern as they are thought to me more contagious and fuelling the rise in cases.

Hospitals in the country are overcrowded with dying people waiting to get treated, even as the health system is being stretched to its limits.

In most states, COVID-19 patients are occupying over 90 percent of intensive unit beds.

Despite Brazil now being the global epicentre of the pandemic, President Jair Bolsonaro has continued to oppose lockdown measures and has tried to reverse some restrictions put in place by local authorities in courts.

He said the damage that lockdowns and restrictions will bring to the economy would be worse than the effects of the infection on the country.

While speaking with supporters outside the presidential residence on Tuesday, Bolsonaro condemned quarantine measures and suggested they were linked to obesity and depression.

Many states in the country have also started to ease down restrictions.

“The fact is the anti-lockdown narrative of President Jair Bolsonaro has won. Mayors and governors are politically prohibited from beefing-up social distancing policies because they know supporters of the president, including business leaders, will sabotage it,” he said.