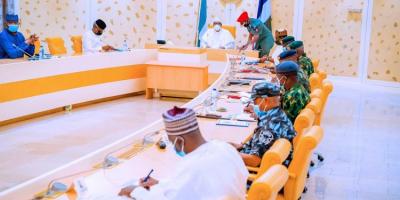 President Muhammadu Buhari is currently presiding over a Security Meeting at the Statehouse, Abuja.

The meeting holding at the First Lady Conference room has Vice President Yemi Osinbajo in attendance.

In attendance at the meeting are Secretary to the Government of the Federation (SGF), Boss Mustapha; Chief of Staff to the President, Professor Ibrahim Gambari, and Defense Minister, Major-General Bashir Magashi (Rtd); and National Security Adviser, Major-General Babagana Monguno (Rtd).

The acting Inspector General of Police, IGP, Usman Alkali is also in attendance.