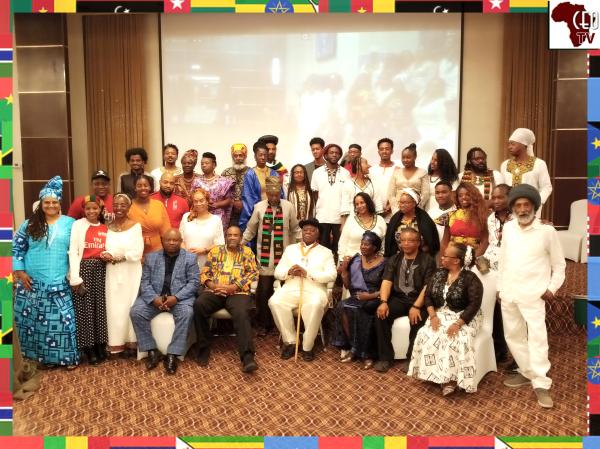 “It is clear that we must find an African solution to our problems, and this can only be found in African unity. Divided we are weak; united, Africa could become one of the greatest forces for good in the world.”

Back from the historic five-day Addis Ababa African Union and African Diaspora Global Roots Synergy Roundtable Summit that took place 23rd – 28th May, 2022, delegated representatives from civil societies, scholars, governments, African Union, African Diaspora and many more from across the globe - Africa, Australia/Asia/Oceanic, USA and Canada, the Caribbean, Europe, South (including Brazil), Central America and the Middle East, gathered together with the vision and goal of stepping up action plan for the historic adoption of the 2012 Declaration Of The Global African Diaspora Summit (DGADS). The Roundtable Global Pan African Summit was to mark the 10th anniversary of the Adoption of the African Union African Diaspora Declaration. The theme of the summit: “Evaluating the Success of the Diaspora Declaration, and Laying out Clear, Decisive, Actionable, and Attainable Path Forward to Repatriation.”

The choice of 25th of May 2022, for the roundtable conference therefore, is not just a coincidence, but a calculated bid by interested Pan Africanists to commemorate the historic day and event of May 25th, 2012, which is now globally recognised as Africa Liberation Day. The Addis Ababa African Union – African Diaspora Summit therefore marked the tenth year anniversary.

Arising from the Global Pan African Roots Synergy Roundtable (GPARSR), the delegates harped on matters ranging from political, economic, social, geographical and cultural issues as they relate to the well-being of African continent and diaspora; premising it on recognizing and acknowledging the supports critical agencies of the body. These include Africa Union Commission and its roles in the implementation of the for the DGADS, 2012; Citizens and Diaspora Directorate (CIDO), which facilitated full participation of African Diaspora as key to building Africa; the Economic Social and Cultural (ECOSOCC), acting as an advisory role and connecting African governments to the Union; the African Commission on Human and People’s Rights (ACHPR), to protect, promotes people’s rights and interpret the African Charter on Human and People’s Rights; etc.

Representatives also recalled the urgent need to redefine the decision of the AU Executive Council under EX.CL/Dec.406(xii) to adopt the current definition of “African Diaspora” which does not only mean of Africans living outside of the continent, but to “consist of people of African origin who are the historic diaspora, the descendants of African displaced by trans Atlantic and Arab Slave Trades and further includes modern migratory Africa, all of whom are all living outside the continent irrespective of their current citizenship and nationality.”

The re unification of Africans on the continent and those in diaspora by consolidating the links with the diaspora especially the Africa Diaspora organizations in Brazil and the Caribbean for technical cooperation in culture, economy , politics, etc; were highly impressed on.

The Sixth Region Diaspora Caucus (SRDC) of the Global Pan African Roots Synergy Roundtable Summit at Ethiopia, Addis Ababa, and now captioned “The Addis Ababa Declaration 2022” has come and gone, but the sweet memories and hopes of what it stands to gain – a united African Diaspora front in the interest of the African continent is an endless possibility. It is noteworthy to mention but a few whose immense contributions to the huge success of the summit can never be over emphasized. The Delegates, Speakers, Panelists, Representatives and Working Group Moderators, etc,; are all to be appreciated.

Professor Dr. David Horne’s immense contributions to the summit are in no small measure a great factor for the success. Professor Dr. David Horne is the President of the Sixth Region Diaspora Caucus (SRDC), USA. He made known that the essence of the international conference is to meet and strengthen the ties of how Africa and its Diaspora can make the Diaspora Declaration of 2012 work effectively. This he said is achieveable through the union political will with political engagement with government and stakeholders to do what to be done, having African Diaspora membership in the Pan Africa parliament to lobby and legislate favourably for the Diasporans. He added that the Diaspora is working hard as respected members of African community and respected members of the new coming United African States in economic, social and cultural fronts. He advised the policy makers and Heads of State and Governments to respect and pay attention to African Diaspora and support the intellectuals who talk about Afrca today and the future.

On the coming international conference at Panama on the 23rd – 28th septembre, 2022, Professor Dr. David Horne said the choice of Panama city as the venue for the summit is largely influenced to bring back African Descendants who speak Dutch, Spanish, etc ; from the Caribbean, Canada, Europe ; they are all Africans; especially in Brazil where the population is 50% African. It is therefore holding in Panama to remind Africans everywhere in the world that they have not been forgotten. He concluded that the Sixth Region Diaspora Caucus is poised to help building Africa that we deserve; and the Africa that would lead the world. He harped on the links that African diaspora all over the world are part of the coalition agenda to work together for a formidable frontier for Africans.

Dr. Barryl A. Biekman co-convener and a member of the planning committee of the summit and of course the African Union and African Diaspora organisation. She is the Home Ambassador, African Diaspora Union in Netherlands. The woman of great substance, proved her shero prowess by contributing dynamically to every series of the workshop. Priding herself as an African and a Diasporan, Dr. Barryl A. Biekman said she got involved in Diaspora matters for specific African issues which has to do with racism against Africans in Europe and other parts of the globe which paints a bitter situation for the Diasporans. She asserted that racism and gender discrimination which is a common place in the everyday life of the diasporans are issues to be declared as crime against humanity in the UN Charter. While urging concerned governments and NGOs to be very committed to this unification, she concluded that the African Union and Diaspora Sixth Region Declaration should be given the desired attention by all stakeholders so as to facilitate the resolutions of the summit.

His Royal Majesty, King Alfred Diete Spiff must not be left out for his rich African cultural and royalty contributions. He drew the attention of the delegates to the fact that not all African countries were affected during the slave trade. He emphasized that only the southern part of Nigeria down to Cameroon and other few West African were affected in this inhuman trade. While expressing his commitment to the African Union and the African Diaspora, he challenged the organization to reach out closely to African states governments and presidents for support. He urged the delegates to visit his country, Nigeria very soon for such connection. King Alfred Diete Spiff is the President, Community Centre International, Nigeria. He was the first military Governor of Rivers state, Nigeria between 1967 – 1975.

Please, note that other delegates whose names are mentioned herein are not in anyway relegated or unappreciated. Everyone indeed did wonderfully well toward the success of the summit. A grateful motherland of Africa is thankful and proud of you all.