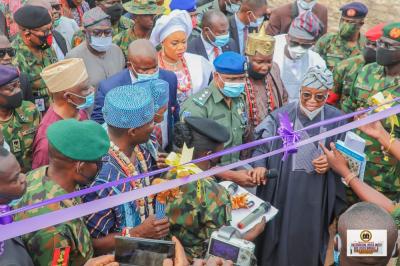 The Chief of Army Staff (COAS) LG Tukur Buratai Yusuf, commissioned a hospital at Kuta Aiyedire LGA, and a Bailey bridge constructed across river osun on Kuta-Ikoyi-Ede road and the completed projects are named after the COAS.

The hospital and Bailey bridge projects were initiated and sponsored by the COAS and the projects are part of COAS several contributions in support of the Nigerian Army non-kinetic line of operations.

The citing of the hospital in Asamu  was much welcome by the people, and the Aafin Olowu of Kuta, Oba Hammed Adekule, Makama Oyelude, Tegbosun III who stated that the hospital and bridge will promote the people’s health, the standard of living  of the people and also increase commerce in their area.

Under the present leadership of lieutenant general Tukur Buratai, the Nigerian Army has exhibited a high level of commitment, dedication, preparedness, and above all, resolve in drawing the civil populace closer to the Army through projects targeted  towards winning hearts  and minds.

The CIMIC sponsored projects are very core to creating strategic narratives and winning hearts and mind. The battle of narratives is crucial to the fight against insurgency, and non-kinetic line of operation which is a force multiplier and enabler in revising civil populace narratives.

The COAS in his remarks expressed appreciation to all the state governors within 2 Division AOR for their selfless contributions and support of units and formations under their respective domain. He also appreciated his Imperial Majesty, O’oni of ife, Adeyeye Enitan Ogunwusi, Ojaja 2 for his contribution to boosting the Nigerian Army against COVID-19 pandemic. Because in the heat of the epidemic the Ooni of ife donated motorized  modular fumigators  to the Nigerian Army which was a concept initiated by the house of Oduduwa machine n tools under the supervision of his imperial majesty, to fight against the spread of the epidemic .

The governor of Osun state, Mr. Adegboyega Oyetola was present at the commissioning ceremony alongside his Imperial Majesty, Ooni of Ife, and his Royal Majesty Aafin Olowu  who added  colour  and wealth of experience to the event. Senior governors, military and paramilitary officials both serving and retired were also present at the ceremony.

The ceremony climaxed when the Governor of Osun state received the COAS in a dinner organized in honour of LG Burutai at the government house, Osogbo, where the chief of policy, and plans, Army headquarters, Abuja, Lieutenant General Lamidi Adeosun, former chief of Defence Staff General, Ipoola Alani Akinrinade, and many other senior officers both serving and retired were all present.