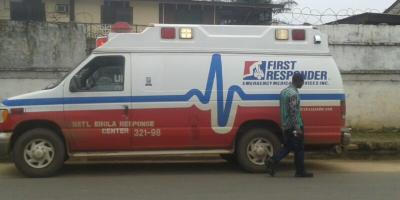 President George Manneh Weah's government has ordered health authorities to replace aggrieved health workers who have gone on strike by qualified health workers of various grades, including nurses, nurse aides, midwives and laboratory technicians, in what seems to be a breakdown of negotiating efforts to resolve their differences.

Liberia's Information Minister Eugene Nagbe authorized a communication dated 19 September and posted on Information Ministry's Facebook page, soliciting applications from candidates to be submitted immediately to county health centers, the Ministry of Health (MOH), and the John F. Kennedy medial for screening by the MOH.

The government is seeking new recruits in order to fill the temporary vacancies that have resulted from the strike action by members of the National Health Workers Union of Liberia (NAHWUL). "The new recruitment will not affect health workers who did not abandon their posts. The government reiterates its commitment to ensuring that there is continuing improvement and viability of the health sector," the statement says.

Following a mass health workers' meeting at the union's headquarters in Paynesville Tuesday, 15 September, Mr. Deemi T. Dearzrua, NAHWUL Assistant Secretary General told a press conference that he and his group were afraid to go into a meeting with the government due to alleged threats from the government.

"Upon this backdrop, the National Health Workers' Union of Liberia (NAHWUL) is [constrained] to withdraw from health facilities across the country as of midnight September 16, 2020 - hereby declare the "STAY HOME ACTION" until the Government of Liberia can meet our demands," Dearzrua said.

The NAHWUL official insisted that the strike will continue nationwide until government certificates NAHWUL as a union, and demanded the immediate cancellation of a policy on redeployment and transfer of health workers.

Moreover, Mr. Dearzrua wants government to include NAHWUL in social dialogue; give Covid-19 benefits for infected health workers and the deceased families; that over 1000 pensioners be given their just benefits totaling about six months and that the alleged gap created on the workflow by their retirement be filled with immediate effect.

However responding to these demands the Weah administration says despite intentional steps it has taken to amicably resolve the ongoing standoff with members of the leadership of "the Health Workers Association of Liberia, they continue to remain uncompromising, unreasonable and recalcitrant."

It says the leadership continues to demand unionization for health workers, in addition to an immediate implementation of standardized pay-grade and increment in salaries for more than 9,000 health workers at an estimated cost of US$15 million per annum.

The government says the health workers' leadership is also demanding payment for more than 11,000 health workers who are not directly involved with COVID-19 response, potentially a payment of US$8 million as "hazard pay" in addition to their regular monthly salary payment through the Ministry of Finance and Development Planning.

During a meeting chaired by President Weah on 8 September, the government says it informed the leadership of the workers that unionizing civil servants, including health workers, would be a violation of Chapter 1 Section 1.5 of the Decent Work Act, and the Civil Servant Standing Order which together exclude Government Employees from unionizing.

"Pursuant to this commitment, the government, through the Civil Service Agency, has already begun the process of recategorizing all health practitioners as a prerequisite to the salary adjustments which form part of their demands," Mr. Nagbe explains. According to him, the government has also committed U.S.$2 million as initial payment of the hazard honorarium.

However, he notes that while acknowledging the hard work and enormous sacrifice health workers continue to make, the government emphasizes that there are limits to its capacity to handle all of the workers' demands in the short run.

He says these decisions have been communicated to the leadership of the striking workers, but they insist that all of their demands must be met as a precondition to calling off the ongoing strike action at several health facilities across the country.

Headlines (Liberia):
Read our other news items below...

President Trump cuts number of refugees allowed in the US...
Read More...