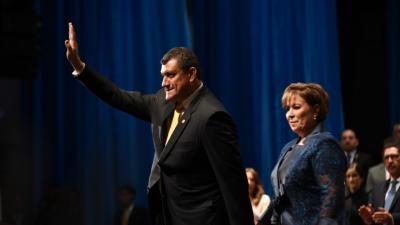 Guatemala’s vice president on Friday said he had asked President Alejandro Giammattei to resign with him “for the good of the country”, following the passage of a budget that has sparked outrage in the impoverished Central American nation.

“For the good of the country, I asked him that we present our resignations together,” Guillermo Castillo said in a message posted on social media.

He also reportedly told the president that “things are not right,” and admitted to tensions between himself and the head of state.

Giammattei, a 64-year-old doctor, swept to power in January promising to clean up corruption and fight organized crime.

But his presidency has been dominated by controversy over his handling of the coronavirus, particularly deficiencies in the country’s hospitals.

He has also publicly sparred with his vice president, who in May revealed the two had privately clashed over the best response to the Covid-19 pandemic.

Most of the funds will go to infrastructure tied to big business, sparking outrage in a country where poverty is widespread and half of children under five years old are malnourished.

Analysts have also warned that a third of the budget will need to be financed by debt.

The country’s Congress has also approved 3.8 billion dollars to fight the coronavirus pandemic, but less than 15 percent of those funds have been invested.

Multiple activist groups are set to convene a protest on Saturday afternoon to demand the president’s resignation.