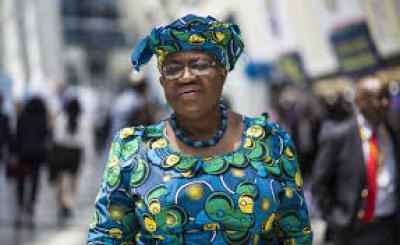 Many US leaders, including Nobel Laureate Joseph Stiglitz, have written President Joe Biden, urging him to support the candidacy of Ngozi Okonjo-Iweala for the office of the director-general of the World Trade Organisation.

an open letter addressed to the newly sworn-in president, the US leaders said Okonjo-Iweala’s ascension to the office of the DG would send a strong message to the rest of the world that Biden is leading an inclusive government.

The team of former senior US government officials and leaders in academia, civil society, and private sector said Okonjo-Iweala will be the first American woman to lead the WTO.

“We write to respectfully encourage you to support the candidacy of the eminently qualified Dr. Ngozi Okonjo-Iweala as she seeks to become the next Director-General of the WTO,” the letter read.

“Dr. Okonjo-Iweala is a dynamic woman of vision who can guide the WTO through its era of reform. She possesses a very rare combination of leadership and experience that is deeply grounded in international trade, finance, economics and diplomacy.

“Her selection, as the first American and woman of color to serve as the WTO’s director-general will send a clear message of inclusion to the rest of the world.”

In October 2020, Okonjo-Iweala was elected by 110 of 164 countries as the most qualified person to lead the world trade body.

The US opposed the selection of Okonjo-Iweala, claiming that she does not have trade experience.

However, in a letter signed by the US leaders, including John Negroponte, former ambassador to the United Nations, Okonjo-Iweala was said to possess a “very rare combination of leadership and experience that is deeply grounded in international trade”.

“We know Dr. Okonjo-Iweala and have found her to be a woman of integrity, an honest broker and a pragmatist who consistently delivers results,” the letter read.

“We believe strongly that she can be a transformative director-general, one who — with your support — will be embraced and effective within and beyond the WTO.

“In sum, Dr. Ngozi Okonjo-Iweala is a uniquely qualified leader poised to help the WTO evolve and succeed for future generations. She is a leader who can also be relied on to pay due attention to the concerns many Americans have about global trade. She has what it takes to lead WTO reforms and take the organization into the future.

“We deeply appreciate any consideration you may provide to her candidacy which is critically important for our nation and the world.”

Okonjo-Iweala was nominated by the Muhammadu Buhari-led government as Nigeria’s candidate for the office of the WTO DG.

Biden has appointed at least three Nigerians to his cabinet, including two Nigerian-born American women.

Recall that CEOAFRICA had reported in November 2020 that Okonjo-Iweala has a better relationship with Biden’s Democratic Party than Donald Trump’s Republican party, emphasising that Biden is likely to favour the emergence of Okonjo-Iweala.

The WTO has postponed the selection process indefinitely.

Female student fights lecturer and tears his shirt for not allowing her to write an exam (video)...
Read More...

Zimbabwe Woman says he asked for it after being caught sleeping with a 13-year-old boy...
Read More...

We do not need cowards as leaders - Yul Edochie tells Nigerian youths to wake up...
Read More...