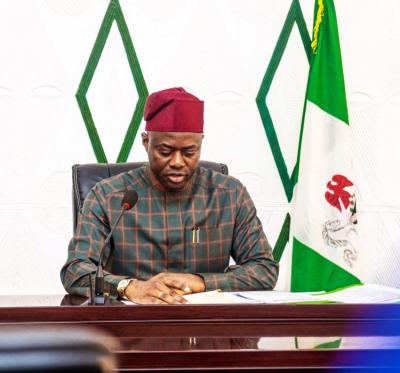 OYO-Wednesday, 21 April 2021: The Oyo State Executive Council has approved the sum of N279.2 million for the printing of ballot papers meant for the upcoming local government election.

The Council has also approved the total of N1.2bn for the construction of new Oyo State Governor’s Lodge at No 2. John Kadiya Close, Abuja, through alternative project funding approach (APFA).

This was disclosed on Tuesday in a Press statement signed by Taiwo Adisa, the Chief Press Secretary to Governor Seyi Makinde.

According to the statement, the Oyo State Commissioner for Information, Culture and Tourism, Dr. Wasiu Olatunbosun, during a briefing session with journalists on the outcome of the 9th executive council meeting of the state for the year, revealed that the production of the ballot papers is directly awarded to Nigerian Security Printing and Minting Company (NSPMC).

The commissioner noted that the government took this step to prove its seriousness and commitment as regards conducting a free and fair local government election.

Olatunbosun stated that "The Council approved the production of ballot papers to be used for the forthcoming local government election, which is scheduled to hold on May 15, 2021. And the production is directly awarded to Nigerian Security Printing and Minting Company.

"We did this to show how serious and transparent we are and how prepared this administration is towards the forthcoming election. We are giving out the contract for the production to a reputable printing company known for printing of security materials.”

He added that in the past elections in the state, the government made use of its printing press, but, this time around, a third party  was awarded to handle the sensitive material so that nobody will have access to the ballot papers.

The Commissioner for Public Works and Infrastructure, Prof Kehinde Sangodoyin, while speaking with newsmen on the outcome of the executive council meeting, also disclosed that the construction of the new Governor’s Lodge in Abuja will be completed in the next six months.

“The lodge has been there for a while and our government noticed the dilapidated condition. It will have the Governor’s Lodge, Deputy Governor’s Lodge, some chalets, fittings and some furniture, which will be of modern type. This is part of what the administration will leave behind.” The Commissioner said.

He added that “The edifice will cost the Government of Oyo State the sum of N1,201,760,000 only. Once the construction has been awarded, the duration for the completion of the project is just six months. So, it is believed that six months after the award of the contract, the project will be completed and will have the facilities I have mentioned earlier.”

On this vein, the Commissioner for Lands, Housing and Urban Development, Abiodun Abdu-Raheem, further revealed that the council authorized the construction of two modern Government Reserved Areas for Oyo State residents, stating that the new GRAs will be well packaged and they can meet the test of time.

He stated that “We have two GRAs that we have packaged in a way that shows a new narrative that is different from what we are used to. You know that the GRAs we have in Ibadan don’t have the infrastructure but the new ones we are bringing on board are well packaged and they can meet the test of time.

“The GRAs on ground now are late Lere Adigun GRA, which is behind BCOS, and the other one is named after Senator RashidiAdewoluLadoja, which is along the Lagos-Ibadan expressway. We have been welcoming applications on these GRAs.”